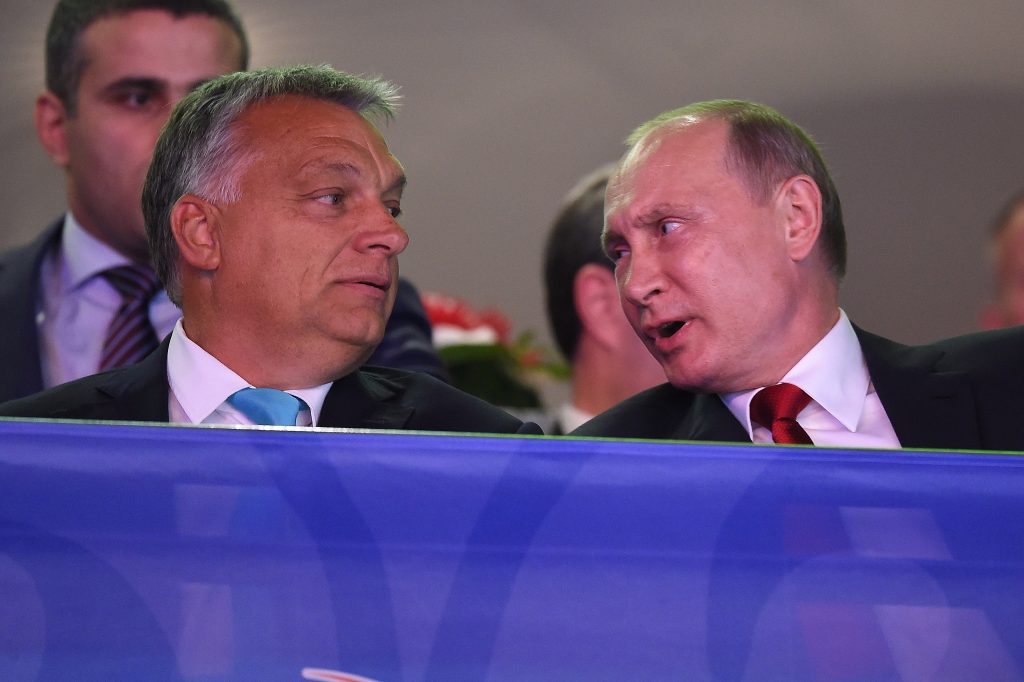 Yesterday, Russian President Vladimir Putin visited Budapest for the second time this year, an event which drew both great attention and controversy.

While Putin was officially in Budapest for the 2017 World Judo Championships (as he is honorary head of the International Judo Federation), he also spent his time at the sporting event meeting with Hungarian Prime Minister Viktor Orbán, discussing areas of cooperation between Russia and Hungary.

In addition to visiting the Judo tournament, while in Budapest the Russian President also accepted the “civis honoris causa” (honorary citizen) award from the University of Debrecen in recognition of “the major role the Russian Federation and Hungary assign to the Debrecen University in the upgrade of the Paks nuclear plant.”

Meeting Between Orbán and Putin 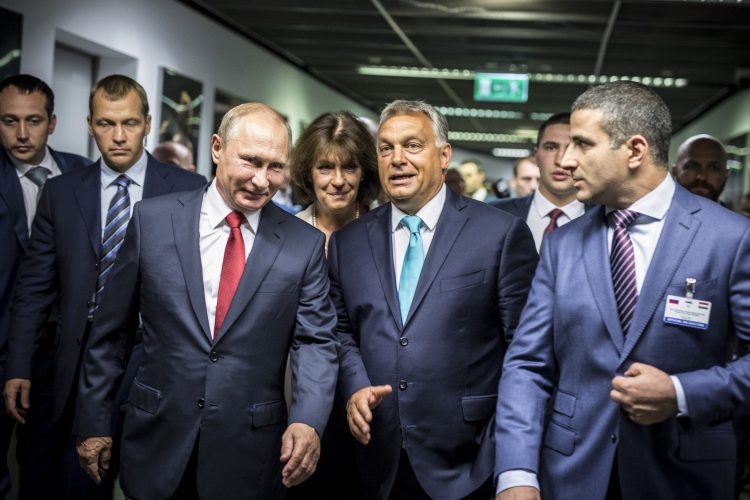 While at the Judo championships, Putin was seated in a box next to Viktor Orbán. There, during the competition, the two discussed the Russian-financed Paks II nuclear power plant upgrade project, as well as other points of bilateral cooperation.

First and foremost, the Foreign Minister announced that “the real construction work” on the Paks II upgrade will start in January, adding that “nothing will stop the investment from now on.”

While Orbán and Putin forged no new arrangements, they reportedly reviewed their earlier agreements. According to Szijjártó, the two agreed that “their joint decisions made earlier have started to bear fruit.”

The two confirmed that the Paks upgrade project, overseen by Hungarian minister János Süli, will begin in January of 2018 following lengthy delays.

Szijjártó said that the project will cost a total of $12 billion USD, $5 billion of which will be paid for by Hungary. 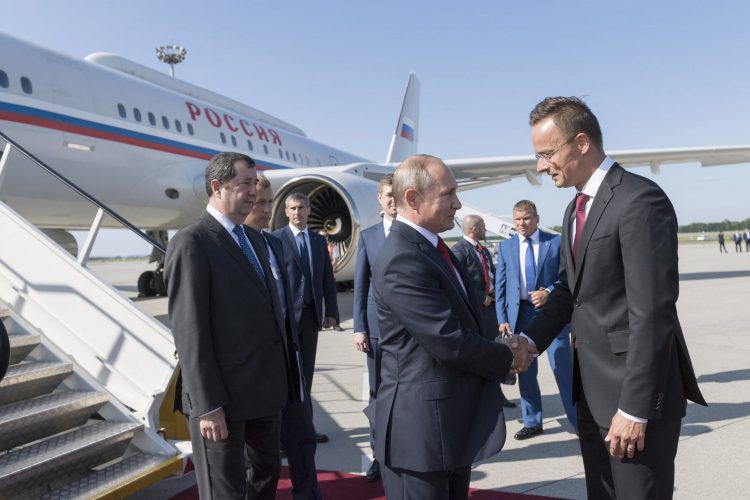 In other Russia-related topics, the Foreign Minister ‘welcomed’ a growth in bilateral trade between Hungary and Russia. In addition, he noted the launch of a new direct flight between Budapest and Saint Petersburg, as well as an increase in Hungarian students receiving Russian scholarships.

Putin also confirmed that Russia was making efforts to supply natural gas via Turkey, Bulgaria and Serbia to Hungary and Austria.

The Hungarian Foreign Minister said that Bulgaria, Serbia and Hungary would upgrade parts of their natural gas pipelines to allow the transport of up to 10 billion cubic metres of Russian gas by the end of 2019.

Speaking to Russian media outlet Ria Novostyi about his visit to Budapest, Putin expressed his satisfaction with the state of bilateral relations between his country and Hungary, saying that “I am happy, that I can discuss bilateral relations at a sporting event. Despite difficulties, economic ties are progressing well.” He also reinforced Russia’s commitment to financing the Paks II Nuclear Plant’s upgrade, and guaranteed $12 million USD of Russian financing for the project.

In addition, while in Budapest, Putin held an open discussion with Orbán, in which the two joked about their respective passions for judo and football, respectively. In addition, the Russian leader promised support to Hungarian economic initiatives in his country, saying that

We see our Hungarian friends and partners’ interest in working on the Russian market and we will do everything possible to support them and help them to promote their business interests in Russia. 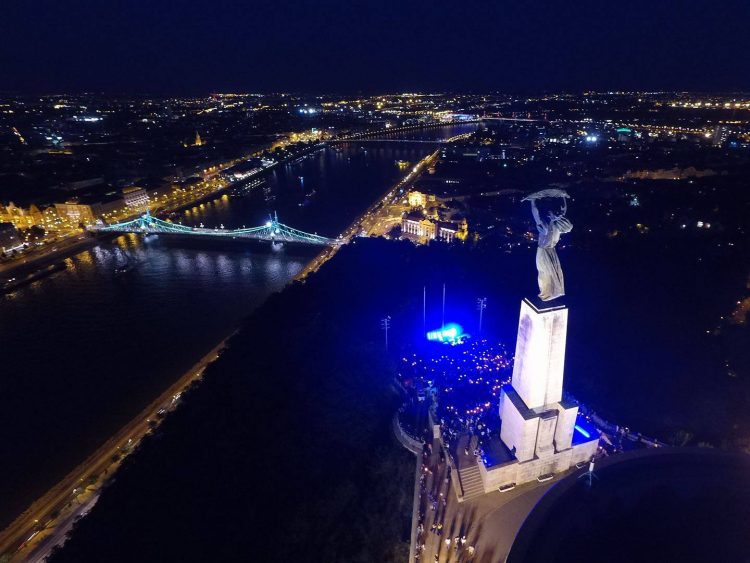 In response to Putin’s second visit to Budapest since this past February, various left-wing groups made use of the Russian leader’s arrival to voice their opposition to the Orbán government’s attacks on the EU and its perceived embrace of dictators and authoritarian strongmen worldwide (in addition to his meetings with Putin, earlier this year Orbán met with Turkish President Recep Tayyip Erdoğan and Belorussian President Alexander Lukashenko, two leaders who, like Putin, have been accused of a variety of violations of human rights, freedom of speech, and freedom of the press in their respective countries. Erdoğan has also been invited to visit Budapest).

By far the most vocal and effective, however, was the recently-formed Momentum Movement.

Momentum, which officially became a political party this past March, came into the political spotlight earlier this year with its successful signature-collection drive for a referendum on Budapest’s bid to host the 2024 Olympic Games. The signature drive was a massive success, with around 266,000 signatures collected; shortly thereafter, the Hungarian government and the Budapest City Council decided to officially withdraw Budapest’s bid.

As part of its protests against the Russian strongman’s visit, Momentum posted Communist-era, “Moscow approved” street names around Budapest, a reference to the decades Hungary spent behind the Iron Curtain. The ‘new’ street signs were accompanied by stickers urging Hungarians to “not let this happen again.” 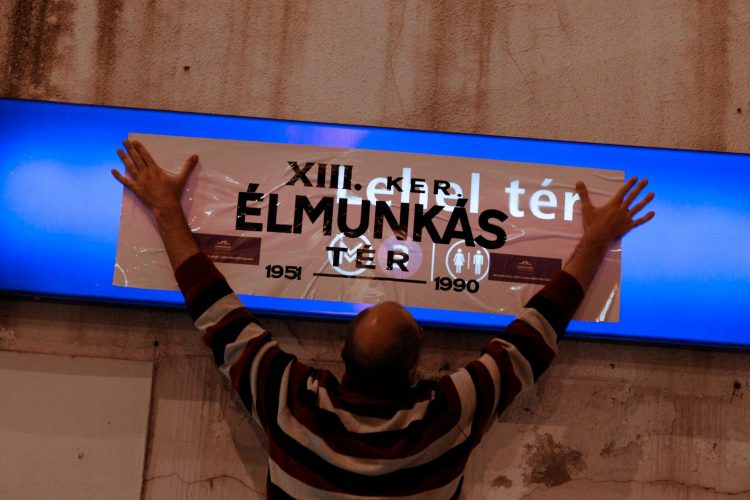 A sticker with a Budapest square’s Communist-era name, placed by the Momentum Movement in protest of Putin’s visit to Hungary (Photo: Momentum Mozgalom Facebook Page)

In addition, some Momentum protesters were in attendance at the World Judo Championships. There, they demonstrated against the Russian President’s visit by wearing shirts emblazoned with the slogan “Go Hungarians! Go Freedom!” as well as Putin masks of the style that have been used to protest against the strongman’s crackdown on his country’s LGBT community, before being removed by event security. 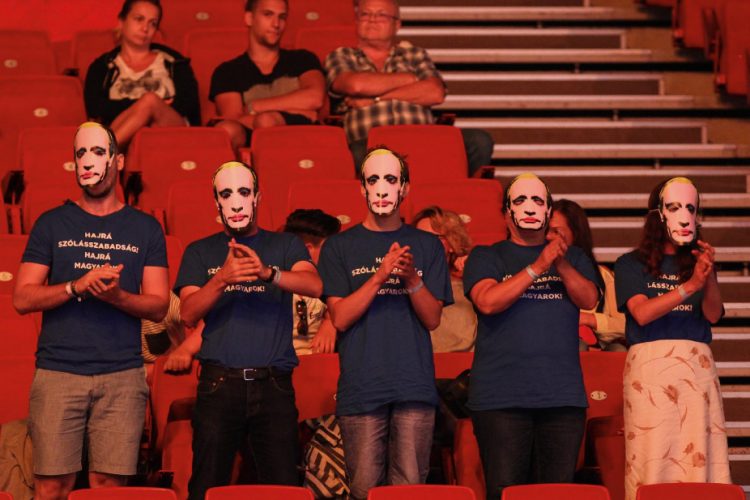 And on Monday evening, party leader András Fekete-Győr held a rally on top of Budapest’s Gellért Hill. In front of the city’s Statue of Freedom, which was lit up with a projection of the EU flag, the Momentum leader said that Hungarians were “tired of Hungary laying down with a KGB agent.” He further argued that Putin was no true friend of Hungary, but rather

a dictator, and a dictator is not a friend to anyone for whom peace, freedom, and Europe are important.

Fekete-Győr also expressed his party’s opposition to the Paks II nuclear upgrade. In addition, he claimed that

the reason Viktor Orbán is moving closer to Moscow, is that he wants to build up a regime of fear on the model of Putin.

Images via MTI, Magyar Nemzet, and the Momentum Facebook Page 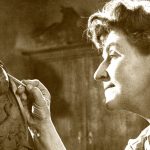