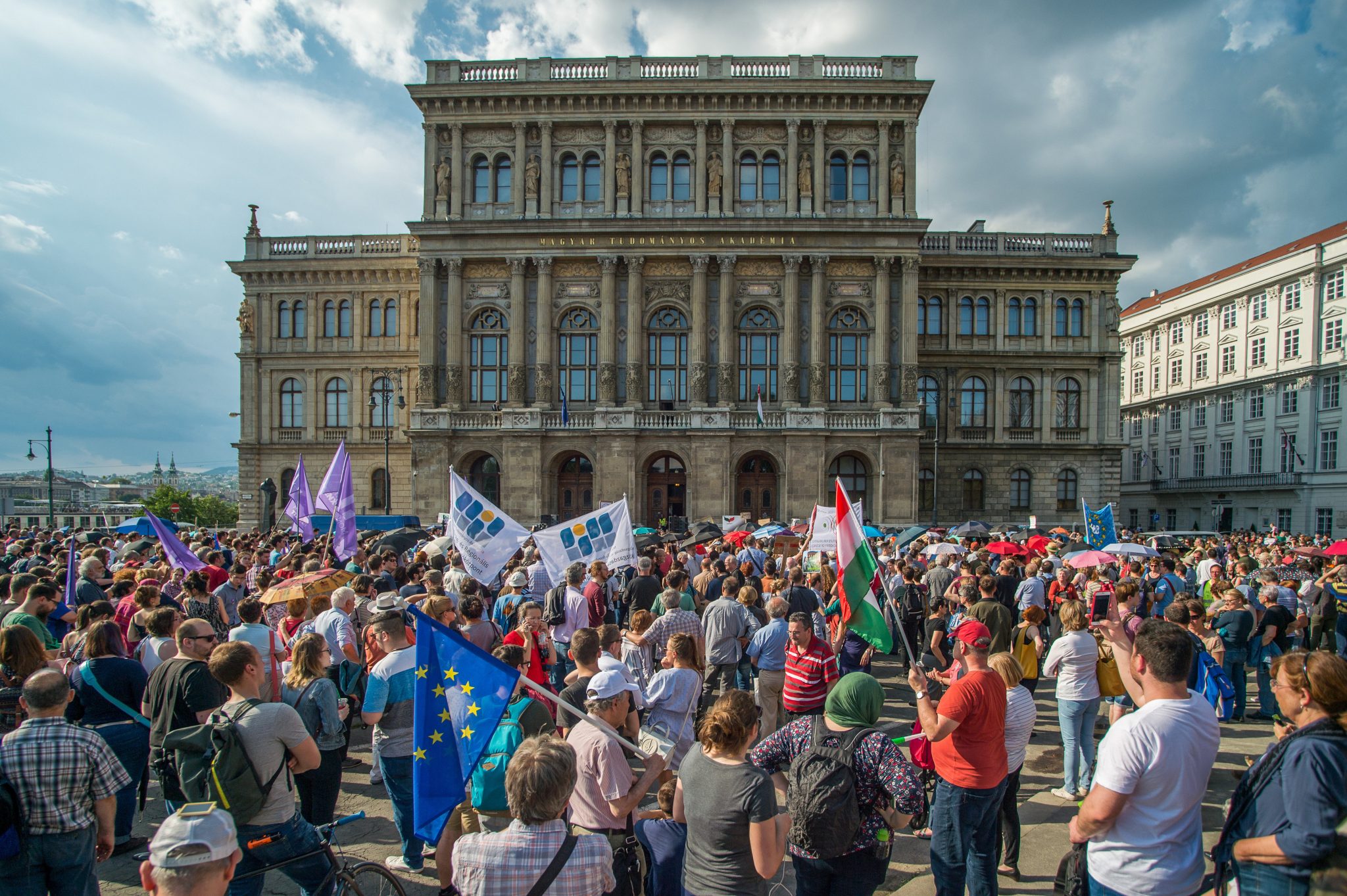 Despite demonstrations and loud protests, on Tuesday, leader of the Ministry for Innovation and Technology (ITM) László Palkovics, presented the bill to the National Assembly, which would completely reshape the Hungarian Academy of Sciences (MTA) by stripping it of its assets and allow governmental control over the 200 year old institution.

Right after the 2018 general elections, the government set off to “reform” the MTA, arguing that Hungary’s no. 1. research center should be more efficient and internationally competitive. Scholars have questioned the verity of these arguments multiple times, adding that it is just the cover story to exert direct, “total” government control over the independent institution. While there have been signs that the Academy would eventually give in, it finally decided to resist. Meanwhile, government’s position hasn’t moved towards compromise either and both Palkovics and PMO chief Gergely Gulyás insisted that in case of MTA’s resistance, they were ready to use the governing alliance’s majority in the Parliament to push the legislation package through.

Accordingly, last week, Index was first to air ITM’s draft regarding the reform. According to the documentation, the government will strip the MTA of all 15 of its research institutes and move them to the Eötvös Loránd Research Network (ELKH), a newly-formed state research network. This new public body will have a 13-member governing board comprised of six government and academic delegates, and the Prime Minister would appoint a chairman. (According to the final document, all members of the governing board will be appointed by the Prime Minister). In addition, it would require the MTA to hand over its assets and properties too. Many view this as the nationalization of science and fear it would put an end to academic freedom in Hungary.

An open letter from the young researchers of the 'Lendület' program to the Prime Minister:
'We emphatically urge You not to support the ill-considered draft law, which is not justifiable by professional reasoning, and, as such, is extraordinarily harmful in its present form. It cannot be in the interest of Hungary to affect a restructuring which the overwhelming majority of the Hungarian scientific community opposes and rejects on professional grounds. The draft law throws aside the results of the negotiations of the past months – which were accepted even by the ITM – and goes directly against the recommendations for reform accepted by the Assembly of the MTA, which took into account the publicly articulated professional requirements of the Government.' The open letter was signed by approximately a hundred grant-winner young scientists.

You can read the whole letter here.

As a consequence, a bottom-up movement of MTA workers, Forum of Academic Employees (ADF), held a demonstration last Sunday, which attracted the biggest crowd ever to take a stance beside the Academy, estimating the total number of participants was around 5,000.

Demonstrators marched from Corvinus University, through CEU to MTA’s main building in Széchenyi Square. The four-hour long rally saw a number of speeches from all walks of public life. ADF member Judit Gárdos was quoted as saying: “…we will not tolerate that government bureaucrats would decide about research, scientific work, (…) that is unheard of anywhere in the democratic world.” Historian Dániel Deák claimed that MTA’s outstanding capabilities make it perfectly able to attract EU funds. However, it also enjoys independence and in the government’s view, this is “wrong”. 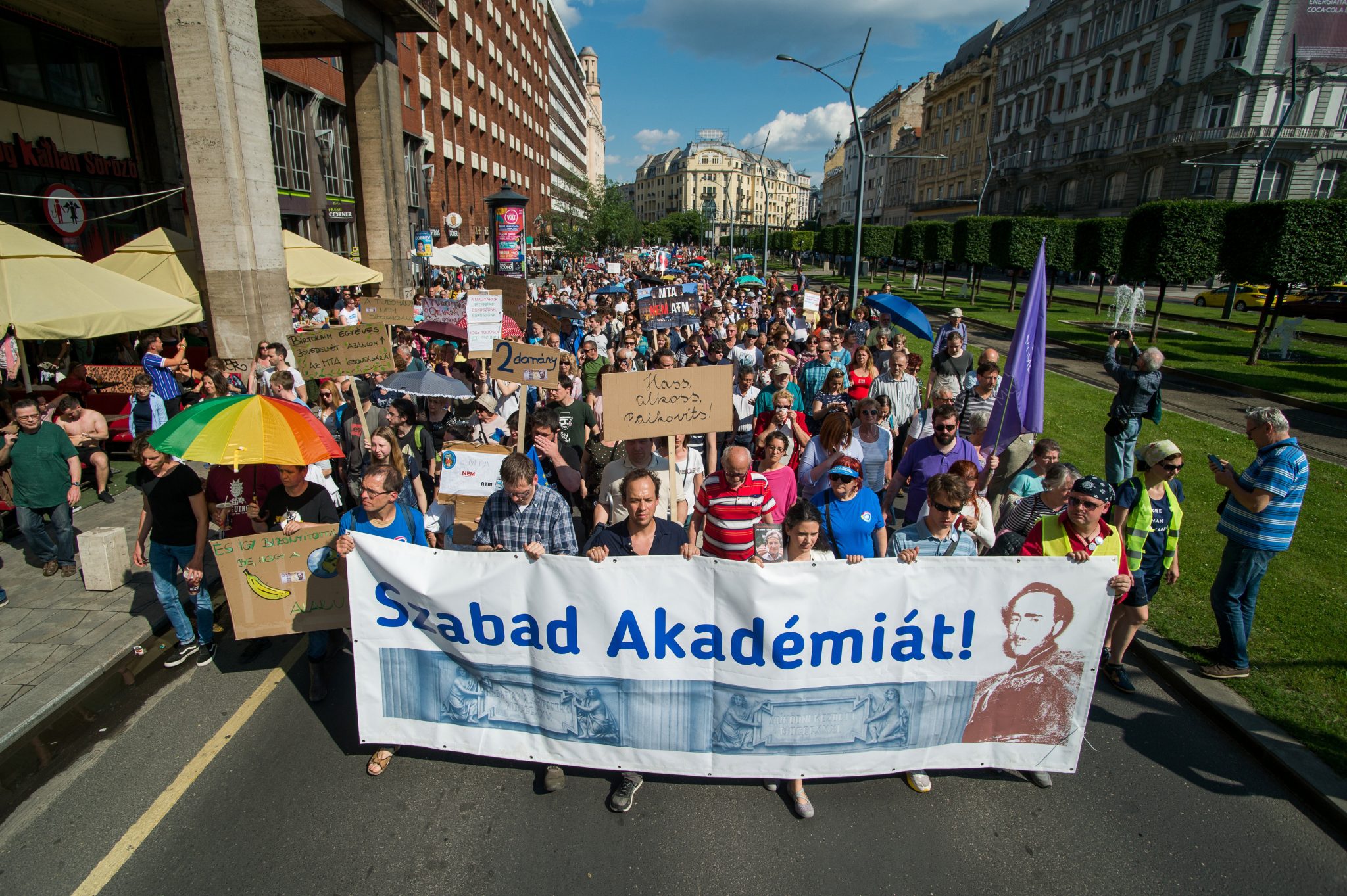 MTA president László Lovász himself also addressed demonstrators and argued that “…the past year has been one of the most difficult ones in the history of the Hungarian Academy of Sciences, founded in 1825. We do not yet know the end of the story.” He wrote that he still hoped “…decision makers will not only hear but also consider the arguments of the academicians, (…) the overwhelming majority of the Hungarian scientific community and Hungarian and international supporters of Hungarian science.”

He also insisted not to “give up negotiating,” arguing that “we must not lose sight of our main objective: that the researchers of our research network can pursue their research here in Hungary, without any political pressure, with freedom of choice regarding their study topics in line with international standards, and planning from a budgeting perspective.”

Historian and MTA full member Attila Zsoldos labeled government’s reforming efforts as “blind forces destroying everything around them” and said that the bill was “full of surrealistic features.” He also claimed that the “government dreams itself a squire with scholars being its serfs who can be relocated from one estate to an other at its will. It, however, ignores the fact that neither the scholars are serfs, nor are the estates its property.”

Social media and internet gossip researcher Károly Takács, who in 2014 won the European Research Council's (ERC) scholarship worth 2 million Euros, decided to leave Hungary for Swedish Norrköping's LiU University. He blames the government's 'systematic attacks on academic freedom,' and claimed that the ousting of CEU was 'the last straw' to spur his departure.

Academics’ demonstrations have no effect on government

Only two days after the scientific community held their demonstration, the Innovation Minister presented the controversial bill to the National Assembly. Furthermore, the 2020 budget bill highlighted the fact that the Orbán government is neither affected by the series of demonstrations from the scientific field, nor the many scientific institutes that have stood up for the Hungarian Academy of Sciences (MTA) and the freedom of science, opposing the government’s forced and large-scale reform.

According to the new budget bill, the MTA will lose most of its state sources. In spite of this year’s more than 56 billion HUF (177 million EUR) it was granted, next year it will be given less than 17 billion HUF (54 million EUR), so the financing will be trisected. 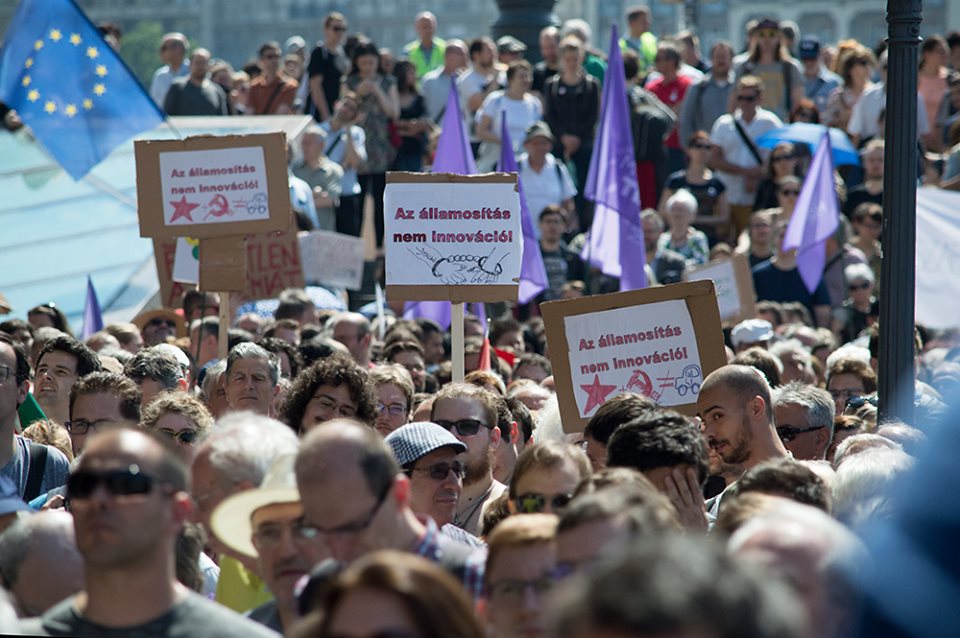 On the other hand, the government plans to radically increase the funding of the -partly newly-founded- government-controlled innovation and scientific institutes. Overall, the scientific field will have access to more public money than before, although the government’s influence will be inevitable.

Furthermore, recently left-liberal weekly HVG asked the European Commission about its position. EC in his response claimed that it “would monitor developments in Hungary’s public research system” and urged the Hungarian authorities “to refrain from any decision restricting scientific and academic freedom.”

Given the Hungarian government’s delicate situation in the EU, and its recent moves, for example, the suspension of administrative courts, this may not be the last shot fired in the battle.