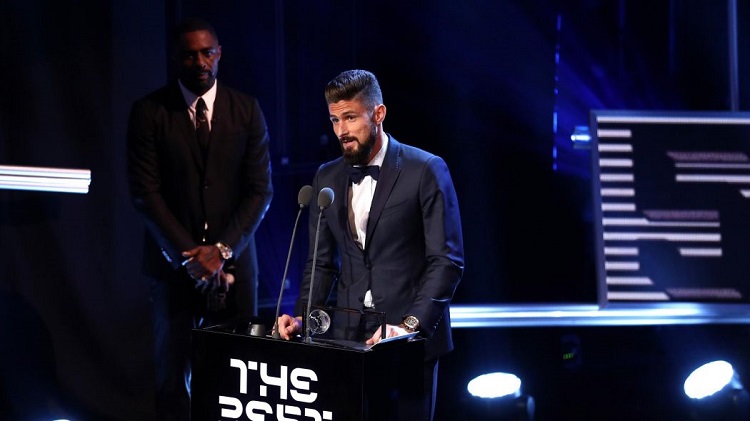 Arsenal striker Olivier Giroud’s remarkable scorpion kick against Crystal Palace was awarded FIFA’s Puskás Award as best goal of the year at a FIFA ceremony held at the London Palladium on Monday.

Fans from around the globe voted in their hundreds of thousands for the Puskás and FIFA Fan Awards, with the Frenchman the ultimate winner for the former thanks to his superb ‘scorpion kick’ goal scored for Arsenal against Crystal Palace in the English Premier League. Giroud’s strike scored in January outpaced competition from Venezuela Under-17 women’s striker Deyna Castellanos and South African goalkeeper Oscarine Masuluke.

On accepting his award, Oliver Giroud said: “First of all I have to say it’s an honour for me. “I’m delighted to receive this trophy today in front of legends of football. Now l’d just like to thank the people who voted for me. I would like to congratulate the 10 nominees who scored amazing goals too. “Obviously I would like to thank my teammates, without them I couldn’t score maybe this goal, and my family.

Very proud and honored to receive this trophy! Thanks again everyone for supporting me! #TheBestFIFAFootballAwards2017#PuskasAward2017 🏆😍🙏🏼 pic.twitter.com/jeevVWje2y

The Puskás Award was established in 2009 by FIFA in order to award the player, who scored the “most beautiful” goal of the year. The award is in honor of Hungary’s Ferenc Puskás, the striker for the Real Madrid team of the late 1950s and the 1960s, and central member of the highly successful Hungarian side of the same era. Puskás scored a once world record of 84 goals in 85 internationals as he is one of the top scorers of the 20th century with 512 goals in 528 matches.