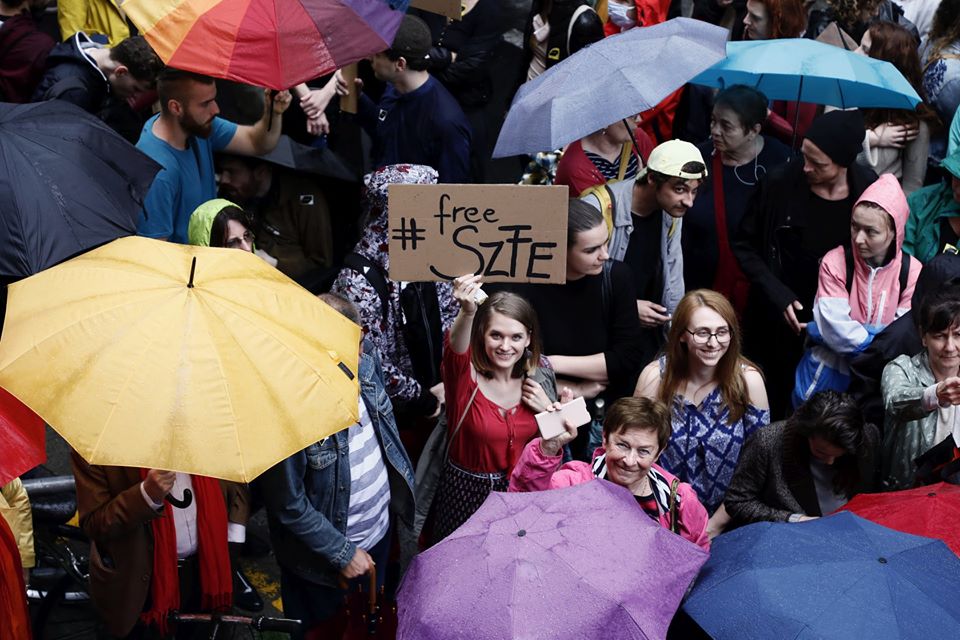 In the wake of the government’s move to change the working model of the University of Theater and Film Arts (SZFE), students, teachers, and professionals fear the new model involves more control and will undermine autonomy.

The history of the Sunday rally began with József Katona Theater director Péter Gothár’s sexual harassment case uncovered in November. It was then the Orbán government and the ruling parties drew big time criticism by arguing that SZFE and basically the whole theatrical world should be reformed, a field where liberal thinking and liberal-leaning personalities have always been the majority in Hungary. Important to note, however, that although Gothár indeed taught there, the university fired him as soon as they were aware of the case, and no harassment cases were reported from the institution. The government communication still tends to point back to that case and aims to link it to SZFE when it confirms its planned changes.

The Gothár case was also the main argument behind the controversial changes in the culture bill in December, which resulted in a control extension over certain theaters. You can find more about it here, here, and here.

A foundation to take over

Then in the middle of the coronavirus outbreak, ruling Christian Democrat (KDNP) leader and Deputy PM Zsolt Semjén presented a law, that from as early as September 1st, would make the SZFE publicly controlled, meaning that a foundation for this purpose would manage its properties, real estate, and decision-making.

The government argues that the operation will be more effective, and the new financial form will cease dependence on the government, and increase autonomy. It would be easier to bring in company resources, and financial procurement may be faster. Government politicians also insisted that the new way of operation wouldn’t endanger public funds, subsidized places, or student scholarships. And a more effective way will improve students’ chances and opportunities.

While the functional operation can definitely have many advantageous aspects, SZFE teachers, students, and many professionals fear the opposite given government communication and previous experience. Indeed, considering that the board of trustees of those universities already operating in this model include a number of Fidesz politicians, it is doubtful how the government would renounce its influence. SZFE also criticizes the government’s rush: changes should go through over several months (the original date was January 1st), and while other universities got the chance to defer, SZFE didn’t.

Fidesz’s communications director, who is also a KDNP member, also seemed to confirm that most likely operational reasoning was not the only factor in the government’s decision. István Hollik argued that SZFE had been left unchanged over the last 30 years. And in this way of operation, “it cannot adequately contribute to the transmission and strengthening of the national identity.” This, SZFE’s teachers and students consistently denied and in a petition (signed since by 800 supporters, including a number of top Hungarian artists) insisted that education is solely determined by artistic and professional values and not by political orientation.

In an open letter, the government-friendly Hungarian Theatrical Society (MTT) led by government-backed director of Budapest’s National Theater, Attila Vidnyánszky, took a firm stance in favor of the changes. MTT argued that the model change is necessary, firstly, due to SZFE’s infrastructural conditions and circumstances. But also the (declining) quality of SZFE’s educational and scientific programs, and the weakening of the university’s international activities and relations make it necessary.

The group also accused demonstrators of having “political motivations,” and in reference to the December demonstrations, it claimed that those worries (mostly about more government control) proved unfounded.

The Sunday demonstration drew around 500 participants, among them many well-known artists, actors, and deputy mayor Gábor Kerpel-Fronius (Momentum). Even iconic film director Béla Tarr addressed the rally in a letter: “without freedom, there is no creation, there is no happiness. It is the school who is for you and not the other way around.” 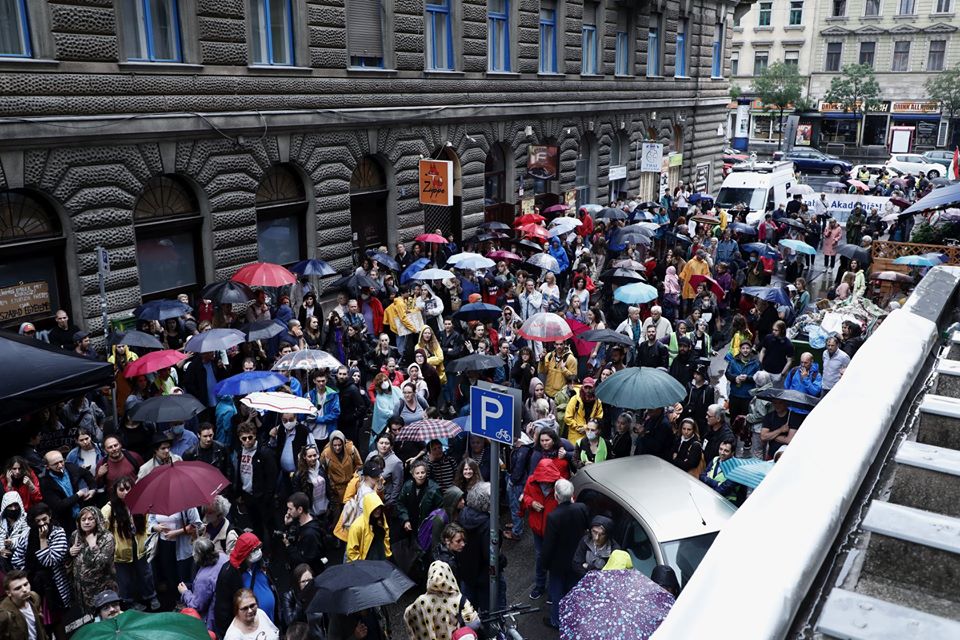 A teacher at SZFE, Kossuth and Jászai-prized actor Géza D. Hegedűs, spoke of the University’s 155-year history: “Do those who now want to break SZFE know who founded it, who came here?” he asked. He believes that now with money and possession of power, some want to erase the past. “They want to enshrine in law that our century and a half of history is no more. They want a new story to begin on September 1st. Their story.”

Finally, participants addressed ITM leader László Palkovics with three main points: 1. The university should remain in charge of appointing the rector, who should be László Upor, the current, democratically-elected rector candidate and former deputy-rector.  (However, the university lacks a rector at the moment, as the president’s governmental appointment is on hold). 2. To start meaningful negotiations with the university and not make arbitrary decisions. 3. The right to select the leaders of the foundation (e.g. the members of the board of trustees) should be transferred to the university.

Meanwhile, while denying that they weren’t preliminary meetings with SZFE’s leadership, László Palkovics promised to sit down with the university’s leadership. Yet given the way he handled MTA’s restructuring and the CEU case, it is doubtful to what extent he or the government would be open to compromise.