Twitter has summarily blocked the Hungarian government’s official account, About Hungary, without explanation, Zoltán Kovács, the state secretary for international communications and relations, said on Facebook on Wednesday.

“This is rather intriguing given the European Commission is publishing its first report on the rule of law on Wednesday,” Kovács wrote.

“It seems that Brave New World has finally arrived,” he wrote, adding “techies” were “absurdly silencing” people who had a different opinion from their liberal views.

The government has taken the necessary steps and awaits a formal response and explanation from Twitter, he said. 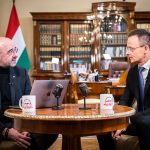