For the 26th Year in a Row, Hungary’s Population Continues to Shrink

In the continuation of a 26-year downward trend, new European Union statistics show that Hungary experienced a net population loss in 2015, according to an article on the economics news site napi.hu.

According to census statistics, 1980 was the last year that Hungary had a net population increase. And even though, since 2000, statisticians have included immigration into population statistics, in addition to the usual figures of births and deaths, that downward trend has continued.

This is an interesting development from an economics perspective, because if the population continues to drop, while life expectancy continues to rise, Hungary will have more retirees and fewer actively employed workers.

And based on projections that have been made based on recent research and statistical analysis, it doesn’t look like this trend is going to reverse itself anytime soon. According to Eurostat, the European Union’s statistical office, Hungary is going to experience net population decrease from 2020 to 2080. By 2020, based on these projections, there will be 63,000 fewer people living in Hungary than there were in 2015.

By 2040, Eurostat figures suggest that Hungary’s population will hover around the 9.5 million mark, while by 2070 that number will dip below 9 million; by 2080, the number of people living in Hungary may drop to 8.68 million. In other words, according to these projections, in the next 25 years Hungary will see its population reduced by 300,000, while over the next 65 years the country will see a loss of almost 1.2 million people.

Via napi.hu and eurostat

Image via the German Federal Institute for Research on Building, Urban Affairs and Spatial Development 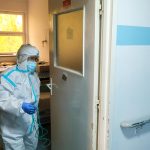