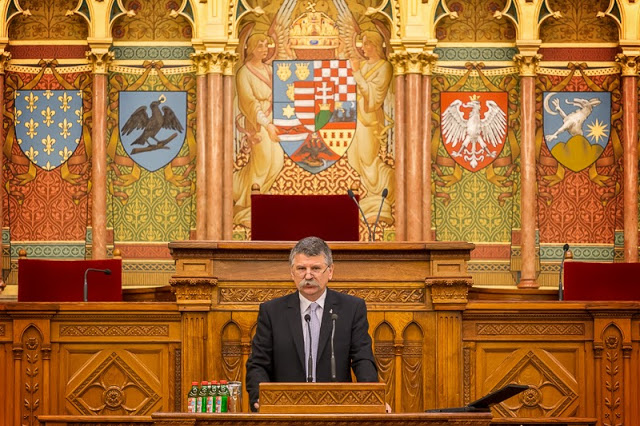 László Kövér, speaker of Hungary’s parliament, at the opening of the Vajdaság Magyar Festival in Vojvodina, Serbia, on Sunday, praised the event for its role in preserving Hungarian traditions. “We are building a Hungarian state which serves the nation rather than leaves it unprotected,” Kövér said, stressing in his speech the importance of a unified Hungarian nation. István Pásztor, leader of the Vojvodina Hungarian Alliance, paid thanks to the Hungarian parliament for its nation-building activities; measures introduced between 2010 and 2014 such as fast-track citizenship and voting rights.

Meanwhile, today László Kövér addressed a conference in Budapest on Hungary’s suppression by Nazi Germany and Soviet Union between 1944 and 1949. The conference was organised by a newly-founded research institute called Veritas. It was established by the government and has been highly criticized by academic historians, arguing that political commitment of Veritas might undermine the critical and professional approach of its researchers.

In his speech Kövér said that the political elite’s task is to represent Hungarians abroad rather than representing foreign interests in Hungary. Throughout history the Hungarian state has repeatedly lost sight of its main task: protecting the country and the nation. Kövér said the political class had moral, political and legal responsibilities. The two decades of post-communist transformation ended after 2010 and the new constitution has given answers to the questions raised, he added.