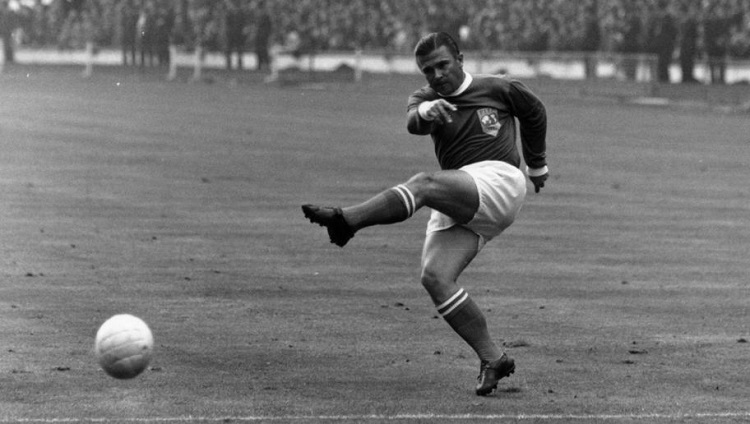 “Teach your children to play football!” This was one of legendary Football player Ferenc Puskás’ favorite sayings; no doubt there are many children around today who were inspired to play because of his own incredible example. Puskás passed away 10 years ago today, on November 17, 2006.

That was a day of mourning in Hungary, as people throughout the country learned that the man who was unquestionably the greatest Hungarian athlete of the 20th century, who had brought a small Eastern-bloc country into the international limelight, who had made his countrymen feel a sense of possibility at a time when possibility was a rare commodity, was gone.

From humble beginnings in Kispest, living in a flat next to the local football pitch, Ferenc Puskás would go on to make his mark on the world stage. He joined his first professional club, Kispest FC, at the age of 16, and would score 358 goals over the course of 349 matches with the team. He would play for Kispest until the 1956 Revolution, although by then the team had a different name; in 1949 the team was placed under the control of the Hungarian Ministry of Defense, and became Army’s official team, christened Budapest Honvéd. Since the club was now was technically part of the army, the players were given military ranks, with Puskás eventually rising to the rank of major, leading to his nickname “the galloping major.”

Just two years after joining Kispest, at age 18, he would already have a spot on Hungary’s national team, making his international debut on August 20th 1945 during a match against Austria that Hungary won 5-2. Puskás scored a goal during that match, and would continue to keep on scoring for the rest of his career. As world-class goalie Cesare Maldini once said regarding Puskás, “I can say this with certainty, he had an unbelievable left foot, his shots were so strong that they literally hurt.”

These shots would keep on coming. Puskás would play a key role in Hungary’s 1952 Olympic victory, scoring a goal against the opposing Yugoslav team, as well as in the 1953 Central European Championship (the forerunner of today’s Euro Cup), where he scored two of the three goals that secured Hungary’s victory over Italy. During 1953’s ‘match of the century,’ ‘the Galloping Major’ would score two goals, leading Hungary’s “Golden Team” to a 6-3 victory over a supposedly unbeatable England. And even in the 1954 World Cup Final against West Germany, the only game the “Golden Team” ever lost while Puskás was with them, an injured Öcsi managed to score a goal in the sixth minute of play. In 85 international matches, he scored 84 goals.

As Manchester United’s legendary manager, Sir Alex Ferguson, said regarding Puskás “”He was a special player in his day without question. How that Hungary team didn’t win the 1954 World Cup is beyond me”.

Following the events of 1956, Puskás would eventually make his way to Spain, where, after joining at the age of 31, he would lead Real Madrid to victory after victory, to the extent that even today, decades later, he is still regarded as one of the best players that legendary club has ever fielded.

Once his days of playing were behind him, Öcsi traveled the world, managing teams from Sydney to Saudi Arabia, from South America to San Francisco, before finally returning to his native Hungary following the fall of the Communist regime that had officially viewed him as a traitor.

Since his death, his reputation has only grown; the team he led, Hungary’s “Golden Team” is seen by many as the best football team in the history of international play, and Puskás himself is viewed as perhaps the best player in World Cup history; today, Hungary’s largest stadium is named after ‘the Galloping Major’, along with a stadium in Italy. So, of course, is FIFA’s Puskás Award, which has been granted every year since 2009 to the football player judged to have scored the “most beautiful” goal of the year.

Via Magyar Nemzet, puskas.com, and the Daily Mail