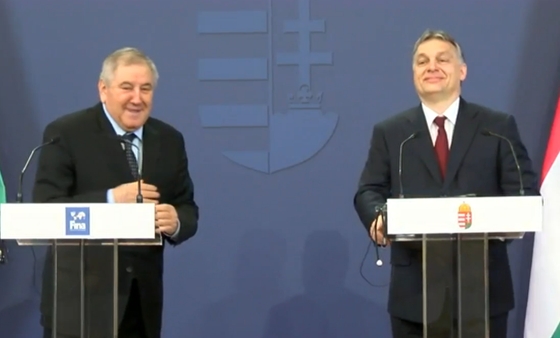 The 2017 World Aquatics Championships are to be hosted by Budapest instead of the Mexican city of Guadalajara, Prime Minister Viktor Orbán announced at a press conference on Wednesday held together with Cornel Marculescu, managing director of the International Swimming Federation (FINA).

The 2017 FINA World Aquatics Championships are going to be the largest-scale sports event ever hosted by Hungary and a special work group is to be establish to organise the event, Mr. Orbán said.

FINA’s managing director Mr. Marculescu explained that the swimming federation’s leadership decided to change the 2017 World Championships’ location to Hungary after Mexico backtracked from hosting the event Hungary had signalled it woud be happy to host.

This year’s World Championships will take place in the Russian city of Kazan and Gwangju in South Korea will host the world aquatics event in 2019. A new tender will be called for holding the 2021 games, the right of organisation of which was previously won by Budapest.

The Mexican city of Guadalajara backtracked from hosting the 2017 World Aquatics Championships after the Mexican state declined to cover the costs of organisation, estimated at around USD 100 million.

The decision also means that Hungary has lost the right to organise the event in 2021, for which a new tender will be called.

The 2017 World Aquatics Championships could also boost Hungary’s bid to host the 2024 Summer Olympics. “Budapest’s excellent performance at organising such a high-level event which attracts the attention of the entire world in July 2017 could be a major factor in the IOC’s decision that September”, Tamás Gyárfás, chairman of the Hungarian swimming federation, said in an earlier statement.