19th ARC Exhibition Deals With Climate Change and Other Issues

Climate alert was this year’s ARC main theme, an exhibition that is open to anyone aiming to react, criticize, and call attention to worldwide and domestic challenges and problems. Indeed most of the billboards reflected climate change, while a number of them discussed, as usual, Hungarian political and power „curiosities”.

The ARC public exhibition started in 2000 with the aim of refreshing the national promotion culture of public billboards. Ever since, it has grown critical of politics and worldwide phenomena, and has moved towards urban street art. Somewhat awaited then, it mostly manages to address and attract younger generations.

The ARC was originally held in Ötvenhatosok Square (close to Hősök Tere [Heroes’ Square]). However, last year, Budapest’s council didn’t allow the exhibitions to be held there, justifying the decision with the Liget project and underground garage construction. Some suspected the growing government-criticism of ARC was behind the decision, something which hasn’t been confirmed.

ARC 2018- You Gotta Be Here to Understand It

Zugló, led by opposition mayor Gergely Karácsony, stepped up to host the exhibition, and ever since, it has been held in the narrow and long green area in between rows of residential houses, close to Örs Vezér Square in the 14th district. As a result, billboards are only illuminated until 23:30 and organizers ask everyone to choose public transport and keep noise levels down.

According to the organizers, in total, some 800 works came in and it was up to a 19-person jury to decide on the distribution of the prizes. Here are all the awarded ones:

1st prize: Marcell Puskás: Unicorn. (“No problem, I wanted to be a unicorn anyway”).

2nd prize: Györgyi Tóth: Attitude. (“There is no climate alert”)

3rd prize: Miklós Zsemberi-Szígyártó “With fat,” in reference to a TV show of controversial Fidesz-founder and pro-government opinion leader Zsolt Bayer where they discussed with Fidesz vice-president Szilárd Németh his gastronomic principles.

Special prize for the most unnerving artwork went for Péter Kós: ‘The egotists (önzői) of the galaxy,’ reflecting the Orbán government’s communication about its (alleged) leading role in defending European culture. (This is a play on words as, in Hungarian, “guardians” (őrzői) sounds and is written similarly to “egotists” (önzői)).

And some of the other artwork:

Why didn’t I study to be a climate repairman? (In reference to former gas worker Lőrinc Mészáros, PM Orbán’s friend, becoming a billionaire in recent years).

Children first… or their future? Climate protection IS family protection.

“We still need Mohács” (In reference to the Battle of Mohács, a decisive defeat of Hungary by the Turks of the Ottoman Empire, which marked the effective destruction of the Hungarian monarchy and paved the way for Habsburg and Turkish domination in Hungary.

In addition, at the end of October, another prize will be given out: that of the public’s vote. You can view and vote for the artworks here until the 20th of October.

The exhibition is available for viewing up until the 13th of October and is free of charge. 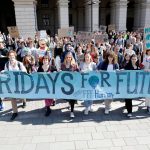 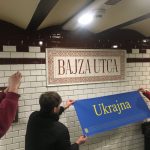