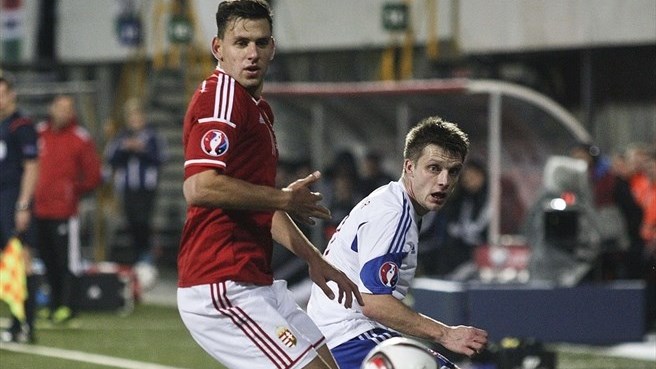 Hungary did not play well but recorded their first win in UEFA EURO 2016 qualifying Group F, defeating an enthusiastic Faroe Islands side in Torshavn. Seeing more of the ball, the Faroes were  full of industry and endeavour during the game, especially in the early stages. Despite that it was the Hungarian team which took the lead in the first half.

In the 21st minute Balázs Dzsudzsák’s subsequent free-kick was palmed wide by Gunnar Nielsen, but from the resulting corner Hungary scored, the unmarked striker ÁdámSzalai turning in Roland Juhász’s ball back across goal. After the break Lars Olsen’s team completed more passes and mustered more possession than Hungary in the first period and their start to the second mirrored that of the opening 45 minutes. As the half wore on, however, it was Pál Dárdai’s Hungary who came to the fore.

Hungary’s captain Balázs Dzsudzsák told after the game that he was happy with the result, but not with the performance. “It was a difficult match to play in. I’m happy with four points from our last two games and if we beat Finland at home we are in a good position”, the winger said. Lars Olsen, head coach of Faroe Island is disappointed with the result. “I’m very satisfied with the performance. Of course, I’m not satisfied with the result.”, he said, “the better team lost today and that is the first time while I have been in the Faroe Islands that I have been able to say that”, Olsen added.