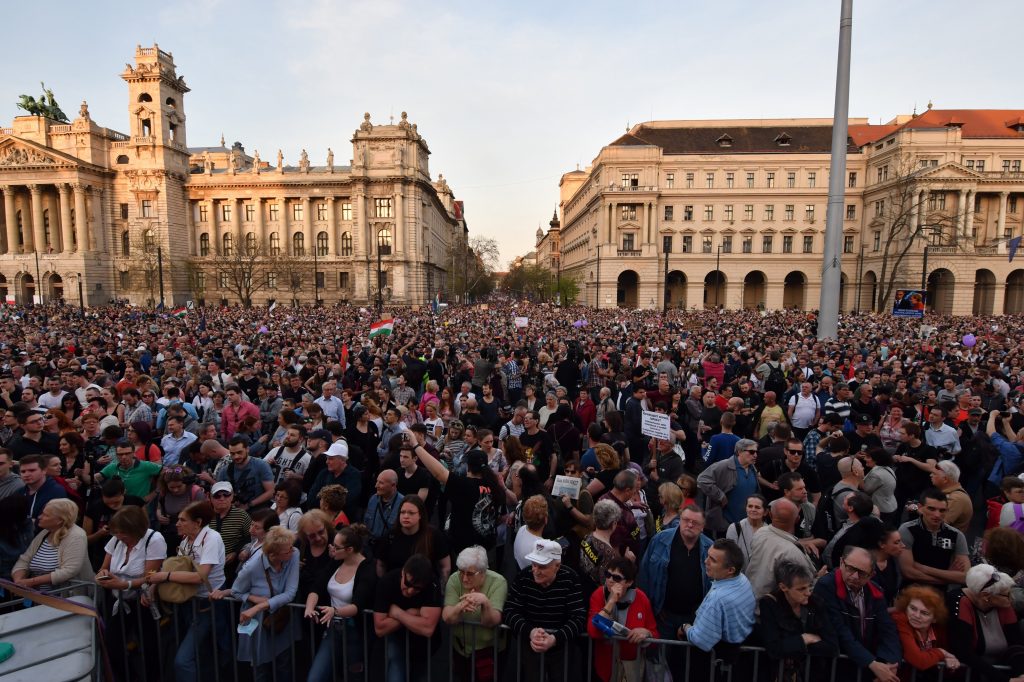 On Saturday, some 100,000 demonstrators, dissatisfied with last week’s general election results, marched in both Budapest and several regional cities, calling for a new “honest” election in what was the country’s largest anti-government protest since 2010. 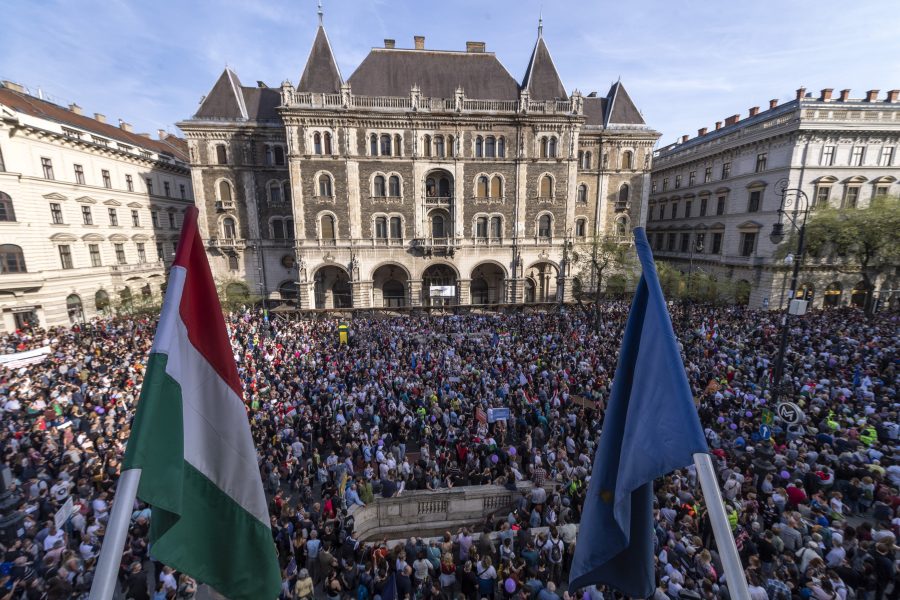 The demonstration came just 6 days after Prime Minister Viktor Orbán’s ruling Fidesz-KDNP coalition won a clear victory in the country’s parliamentary elections on April 8th, securing for themselves a two-thirds majority of seats.

The main protest organized in the Hungarian capital was entitled “We are the Majority! – Protest for Democracy“. The demonstration, whose size has been estimated at “around 100,000 people” by both the BBC and Politico, started in front of the opera house on Andrássy Avenue. Protesters made their way to Kossuth Square, in front of parliament, to hear speeches. 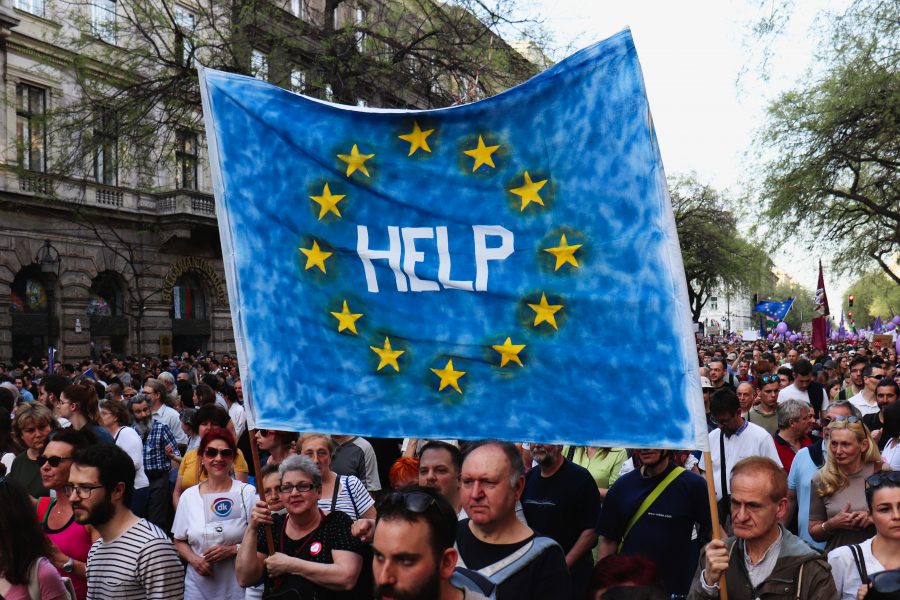 The organizers, who announced the demonstration on Facebook, argued that

the election system of Fidesz and the government’s campaign of hate have squeezed the majority into a one-third minority.

They called for a recount of votes, a free press, a new election law and for the “opposition not to fight with itself”.

Multiple reports noted the ideological diversity of the crowd, with supporters of left-wing and right-wing opposition parties in attendance. This was reflected in the flags protesters brought with themselves: Hungarian tri-color flags, EU flags, and the striped banner of the House of Árpád (a symbol of Hungary’s medieval kings that has been adopted by the modern far-right) could all be seen waving in the breeze.

Arriving in front of the parliament building, the crowd filled Kossuth Square, and flowed over into neighboring streets as well.

Speakers at the square called for solidarity and unity among democrats in the interest of freedom, democracy, the rule of law and freedom of the press. They also urged joint action by opposition parties to unseat the government.

Balazs Gulyas, who organized an earlier demonstration against a proposed tax on internet use, argued that Fidesz had become “a party of lies, hate, fear and stolen assets”. He said the “playing field was terribly tilted” during the election, adding that if Fidesz had any honor, it would dissolve parliament and call new elections.

Péter Márki-Zay, the recently elected mayor of Hódmezővásárhely, in south-eastern Hungary, who won a surprise upset victory in the Fidesz stronghold, urged protesters in a letter to pull together for

a Hungary without corruption and without fear. 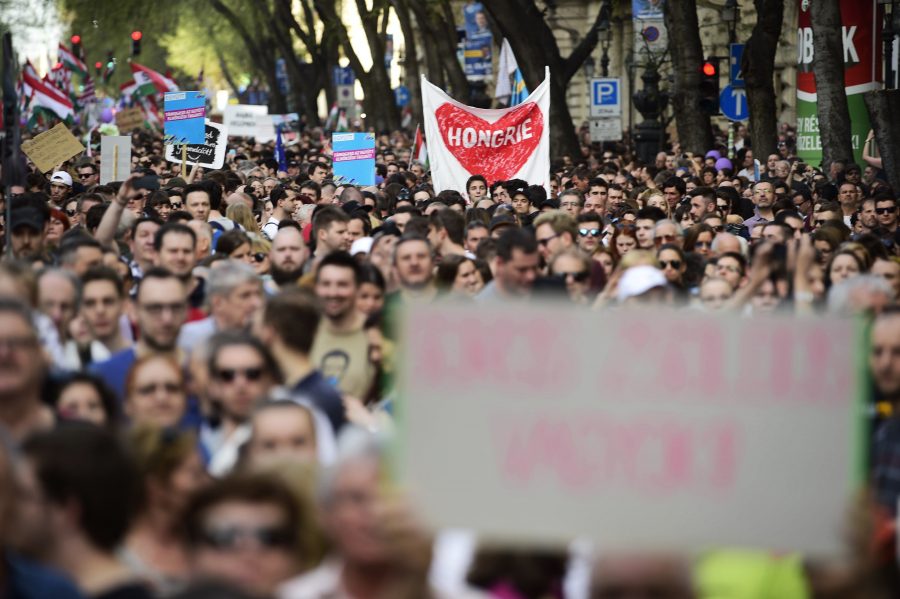 Protesters making their way from the Opera to the Hungarian Parliament (Photo: MTI – Zoltán Balogh)

Gergely Homonnay, a writer, journalist and teacher, called for a new electoral system and demanded that Chief Public Prosecutor Péter Polt be recalled so that corruption cases can be properly investigated.

Viktor Gyetvai, the organizer of the Independent Student Parliament demonstrations, said the demonstrators were there to say no to oppression. This movement

“is the beginning of a process, which means hope” that young people do not have to leave the country, but can grow up here, establish families, live in peace and democracy. 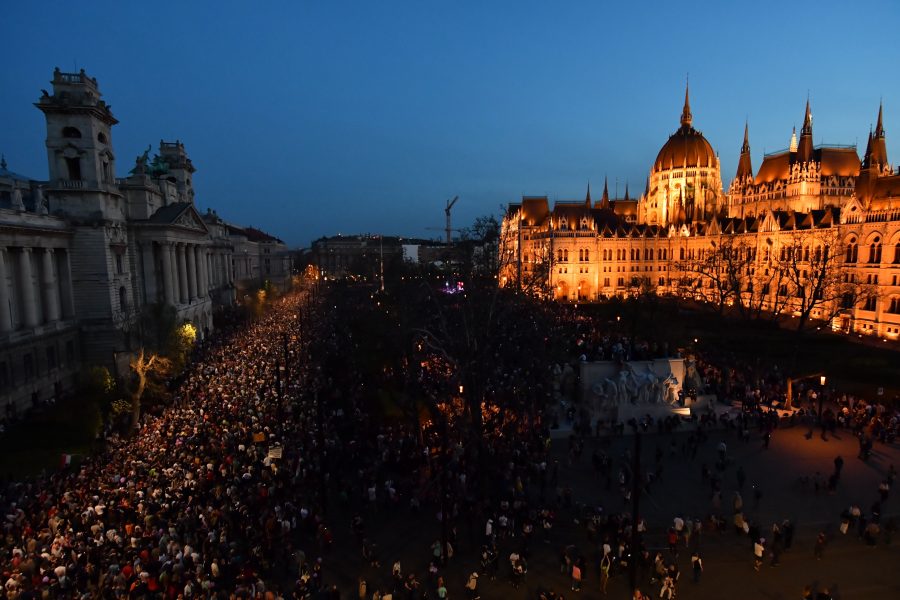 The demonstrating crowd in front of the Hungarian Parliament (Photo: MTI – Márton Mónus)

Some of the protesters’ complaints echoed concerns that were recently raised by the Organisation for Security and Cooperation in Europe’s (OSCE) recent report evaluating Hungary’s most recent election. While noting that voting was “transparent” and democratic, the OSCE argued that

hindered real political debate during the run-up to the election. In particular, the report noted the way in which Hungarian state media’s coverage of the race clearly favored Orbán and Fidesz.

The demonstrators said they would continue to protest to see their demands met.

While the Budapest demonstration was by far the largest, it was by no means the only protest held on Saturday. In addition to the huge crowds demonstrating in the capital, protests were held in the northwestern city of Győr, as well as in the southern cities of Debrecen and Pécs; in the latter town, where the demonstration was held on Sunday, over 2,000 turned out to protest the electoral victory and policies of the Orbán government. Dissatisfied voters in Hungary were joined by protesters in London and Berlin, where 300 and 120 people, respectively, came together to demonstrate. 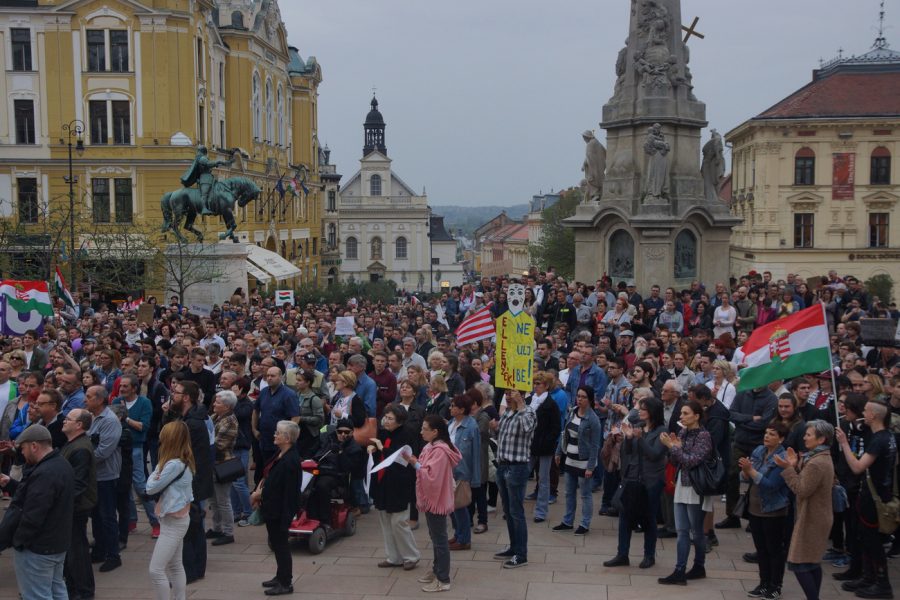 As the BBC notes, in the wake of Saturday’s high turnout, event organizers have called for another demonstration this coming weekend as well.

Saturday also saw the publication of a “samizdat” edition of the recently shuttered Magyar Nemzet, which was Hungary’s last major non-Fidesz-aligned print daily before its abrupt closure last Wednesday. 40,000 copies of the paper’s “underground” edition were distributed to participants in the Budapest march.

Via MTI, index.hu, the BBC, politico.eu, theintercept.com, and Facebook